Imagine it as Tinder – maybe it’s a match! 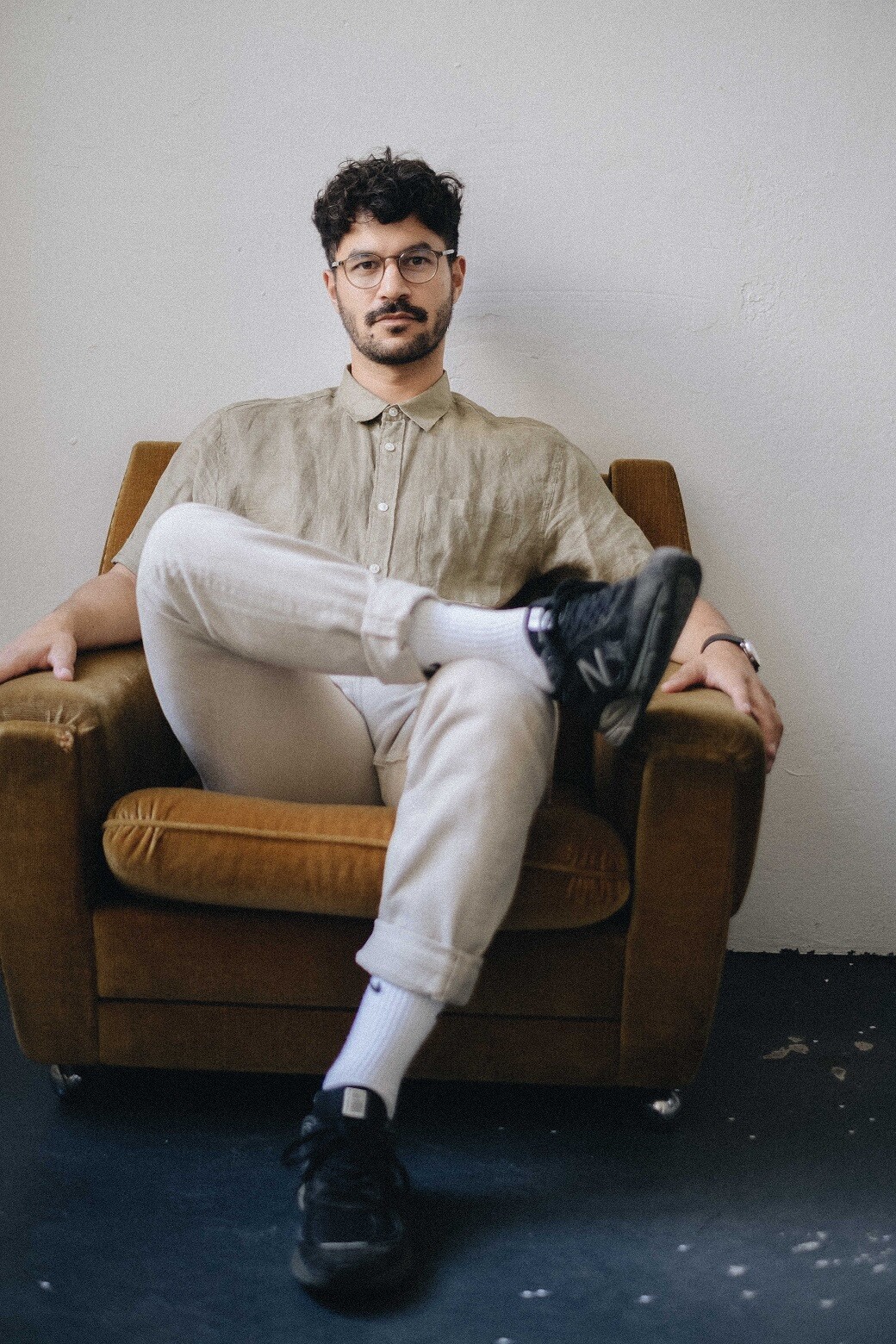 Co-Founder & CEO.
Djef Riady Rifamole.
"Would you describe yourself as a creative person?" - "I'm not a creative in the traditional way, but I'm very creative in terms of thinking and interpersonal skills." This is exactly how, and no other way, our CEO Djef can best be described. Formerly a consultant and always a people person by nature, he is now responsible for the strategic part of the company. He ensures that the teams are put together efficiently on both a professional and human level, is the point of contact with our customers and investors, and above all strengthens the company from the inside out. He himself sees all employees as incredibly intimate, yet unique characters, whom he wants to lead in such a way that they unfold their maximum potential. Ambition coupled with empathy - a dream ingredient for a true visionary. Or in more metaphorical words from himself: "So far, I've been very focused on the yang through my professional career - in the future, I want to break away from that and discover the yin." 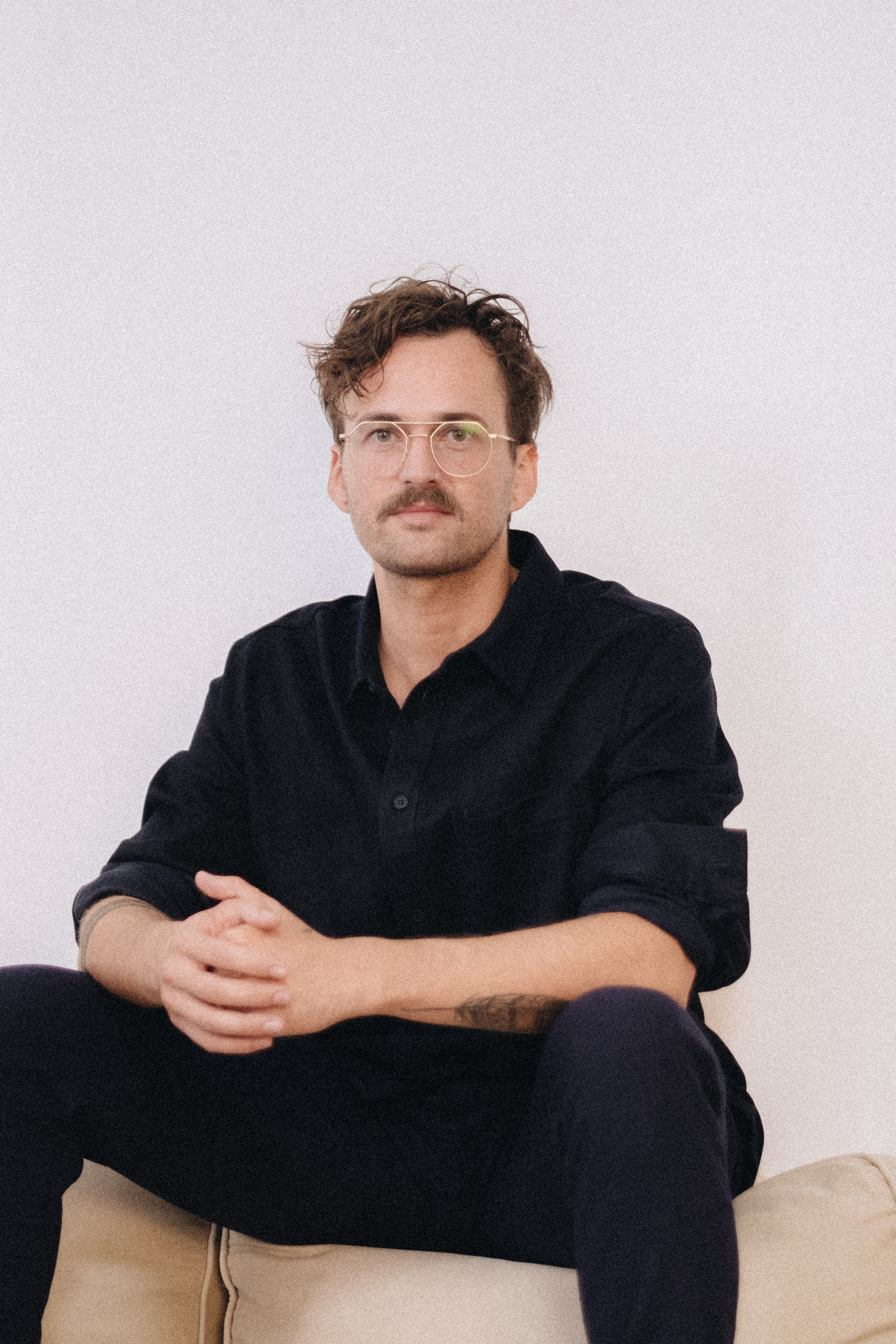 Co-Founder & CTO.
Wilhelm Raider.
In the middle of the year, everyone in the company took a personality test. Willy's statement on the results: "I was actually a bit surprised by my results because I consider myself more of an introvert, but in my professional life I'm pretty balanced - probably because we've had to do a lot of different things ourselves through startup life. Maybe I'm Mr. Robot - he also has two personalities and likes to hack." Own quotes still hit it best. Willy is Co-Founder, CTO, by far the most creative person in the company, the man with a solution for every problem, and with a suitable tool for every challenge. With a seemingly endless enthusiasm for data (and Mate) he disappears most of the time between his screens and builds mind blowing softwares. From space engineer to data engineer with a vision of the future. One could almost think we are talking about the human incarnation of Back to the Future. 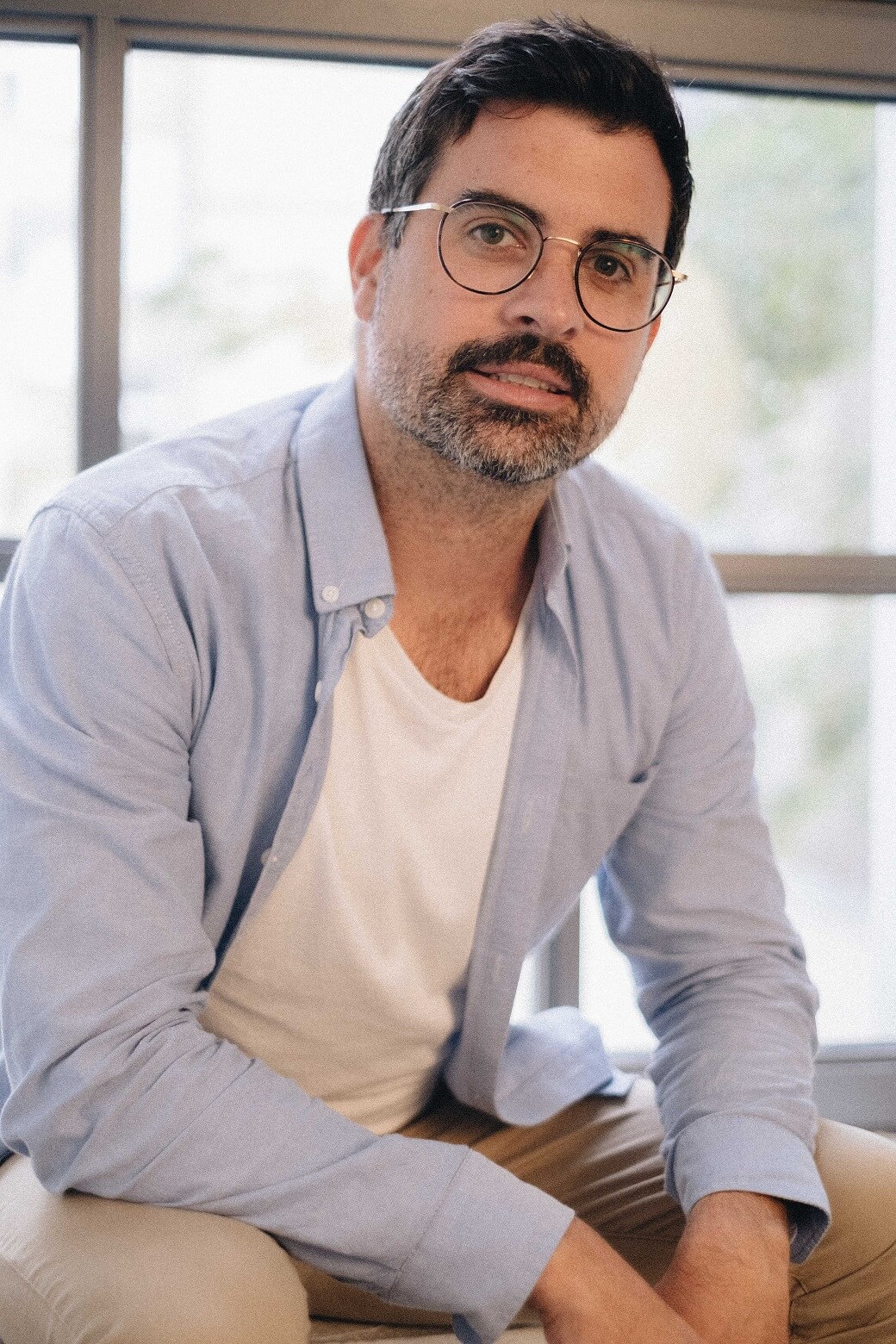 Sales.
Daniel Cocard.
"On a scale of 1-100, how much would you describe yourself as a coffee junkie?" - "97,9". With an answer like that, it's little surprise that Daniel is our man with the charming words for our customers. As the link between the techies and the customers, he turns cryptic numbers into tangible words. But equally, he returns the customer's concerns to the techies by finding out what the market needs, what developments could really help the customer, and where the biggest problems exist. As he says himself, data is highly relevant to him internally as well, since sales is the area where you can truly be measured. Would you still be surprised if I tell you that he once created an Excel and built his own CRM system there to better understand his customers? One day he will probably also come up with an Excel for the best restaurants and wines in Cologne - and we wouldn't dare to question it. Neither should anyone. 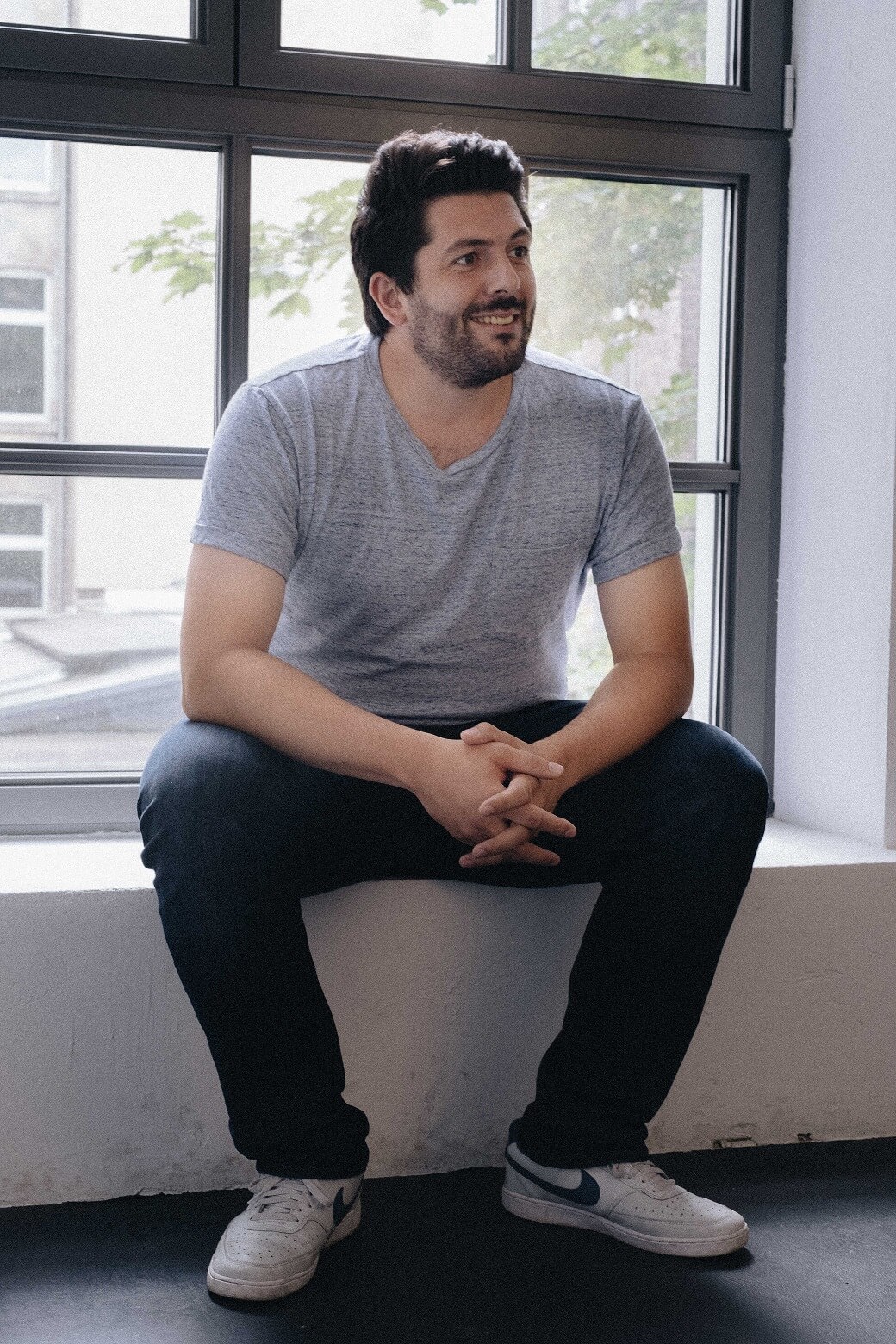 Key Account Manager.
Denis Bulut.
May we introduce: The man who made sure accounting moved from shoeboxes to folders. The man who proudly revolutionized the term "girl for everything" to "boy for everything." THE man who witnessed the growth of the company live when 8 invoices suddenly became 800 at the end of the month. THE man who was allowed to call himself employee number 1 in March 2019. For pure stylistic purposes, this sentence does not begin with "THE man" - even though it could go on and on. Because he's does not only the internal accounting, but is also in close contact with some of our customers and an essential project manager. This task is almost more important internally, as he is the one who reminds everyone of their deadlines in the project management system and sometimes even gives us a kick in the pants. Ah, there's one more "The man": THE man who recently had the first datazeit baby! 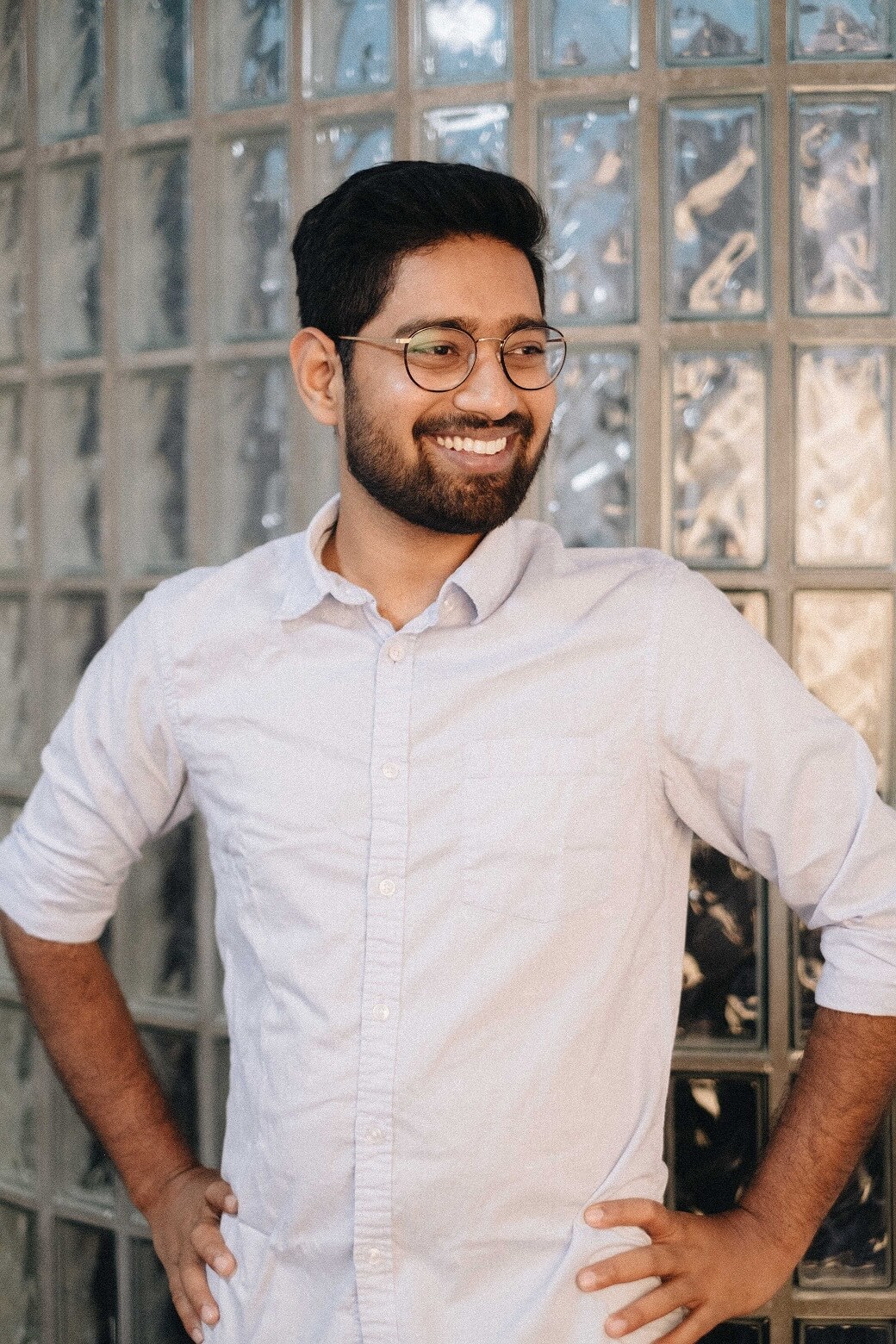 Data Scientist.
Aquib Javed Khan.
If you ask Javed how he rates his programming skills after more than 4 years of work experience in different industry verticals on a scale of 1-100, a gentle 65 comes across his lips, coupled with the side comment: "There is still so incredibly much I want to learn and be able to do in the field I am working in". Now the masses are asking: what exactly is Javed doing in his field so far? Without going into too much detail, you can say: he is our man for Natural Language Processing (NLP). He figures out how to aggregate millions of data points, recognizes which data are similar and gets the insights out of them. Simply put: simplifying data to get actionable insights. He himself claims that he only realized the power of data when he started working in the field and saw how much revenue could be gained from data. We think: he has always known it (after he casually mentioned that he spends 80% of his time on the internet because there are just too many exciting websites.) Just too obvious. 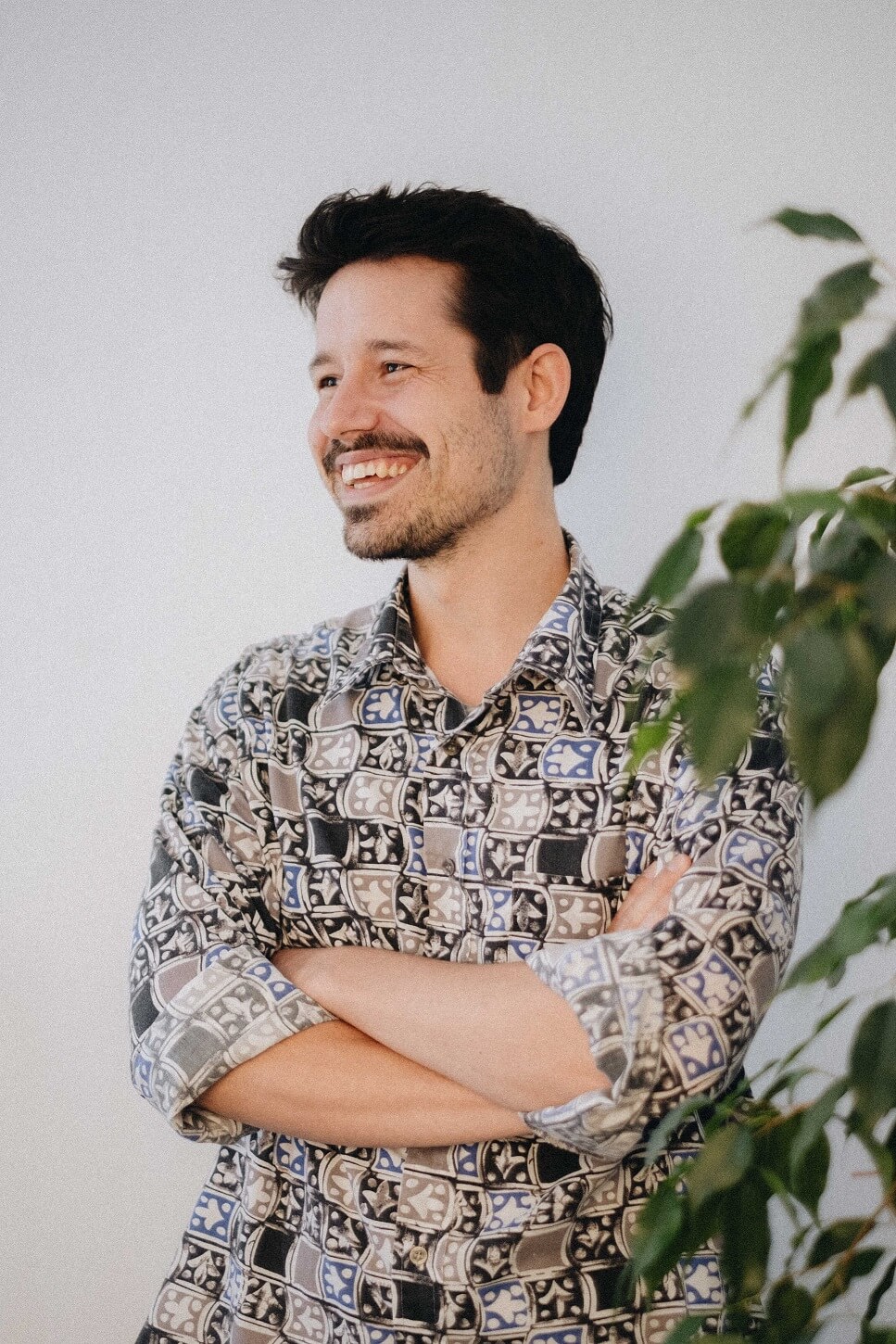 Data Scientist.
Jonas Riedel.
Having fun in IT classes in school? For some, it was possible - as it was for Jonas. And so after school - drum rolls with shockingly surprised faces - he went on to study mechanical engineering. During his studies, he quickly realized that the scientific approach is also a big part of artificial intelligence. And WHAM, his final thesis was all about neural networks. Since January 2020, as a Data Scientist, he has been making sure to filter out the added value from data by transferring masses of raw data into models and ultimately processing it in a way that even those who love data as much as most people love capers can understand. In short: our programmer for analytics and visualization. Not to forget to add: Jonas is an essential part in the development of our one and only magic Matching-AI. Through his enviable self-discipline, he manages to work continuously on the software for 8 hours a day, with nothing but a few walnuts in between.
Office Management.
Bianca Hauschildt.
"If you were to describe yourself with one object, what would it be?" - "A big beautiful sunflower." Our dear Bianca could not have given a more beautiful and accurate answer. Because: not only is she tall, but she also makes office life a more beautiful work environment. This includes organizing team events (after which meetings with each other suddenly become much easier), shopping for small treats (which make thinking much easier) or writing invoices (which make looking at our money account much easier). As a trained office management assistant, she thus maintains an overview of the administrative part of the company. So that in the end everyone has time to focus on their core business and blossom like a sunflower. Her relation to data? Ever since the discussion about Payback points started.
Legal Consultant.
Sener Dincer.
Having already worked for a tech news website at the age of 17, plus having realized at an early age that Youtube isn't just free for altruistic reasons, Sener's path towards studying law in the data compliance field wasn't entirely surprising. After talking more and more with our founders about the potential to combine legal and tech in a meaningful way, a few coffee walks turned into a permanent position in late summer 2020. Meanwhile, he is not only responsible for employment and customer contracts, but mainly for compliance work in the field of data protection, competition law and copyright as well as in market research to work out promising, not yet existing services that offer legal and data as a package. In human language: that what we do and provide to the customer does not become the next Guttenberg affair. 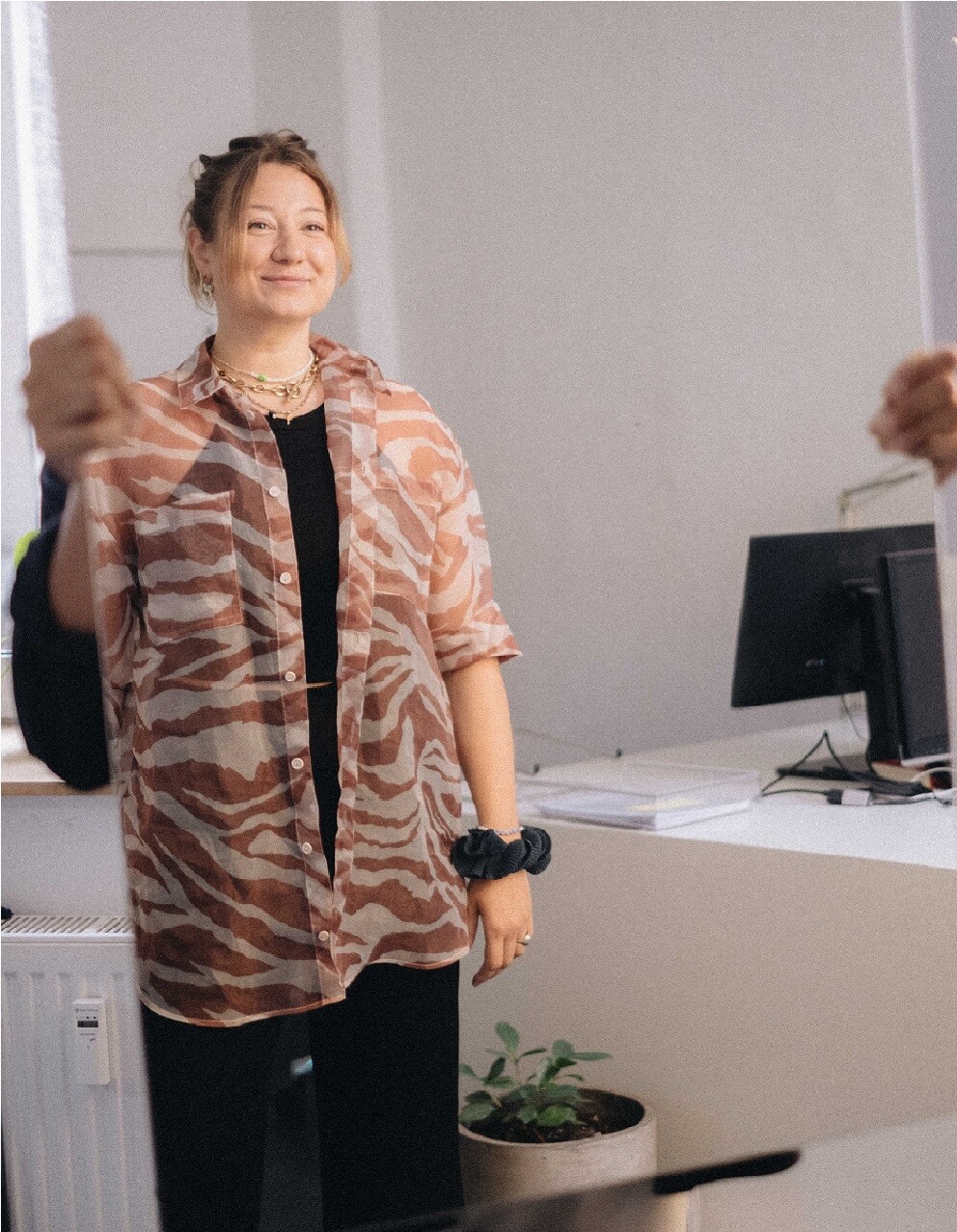 Brand Communication Manager.
Clara Heins.
Well someone had to write the texts on this website, right? And that is - as you might have guessed by now - me. Some authors and copywriters would probably say now that the break into the first-person perspective within the texts on this page is not good for the reading flow. I say: writing about yourself in the third person singular feels like you have multiple personality disorder - not desirable. And what else does Clara do, the other Claras keep asking? Kidding. Together with Hannah (next in line) I am responsible for building the brand. Meaning? Thinking up strategies for all channels, writing texts for pretty much everything, doing creative things like conducting interviews (everything you could possibly need in terms of content) and much more that I don't even know yet. Maybe worth mentioning: the only one who drinks her coffee with cow's milk in the office.So not 2021, that girl. 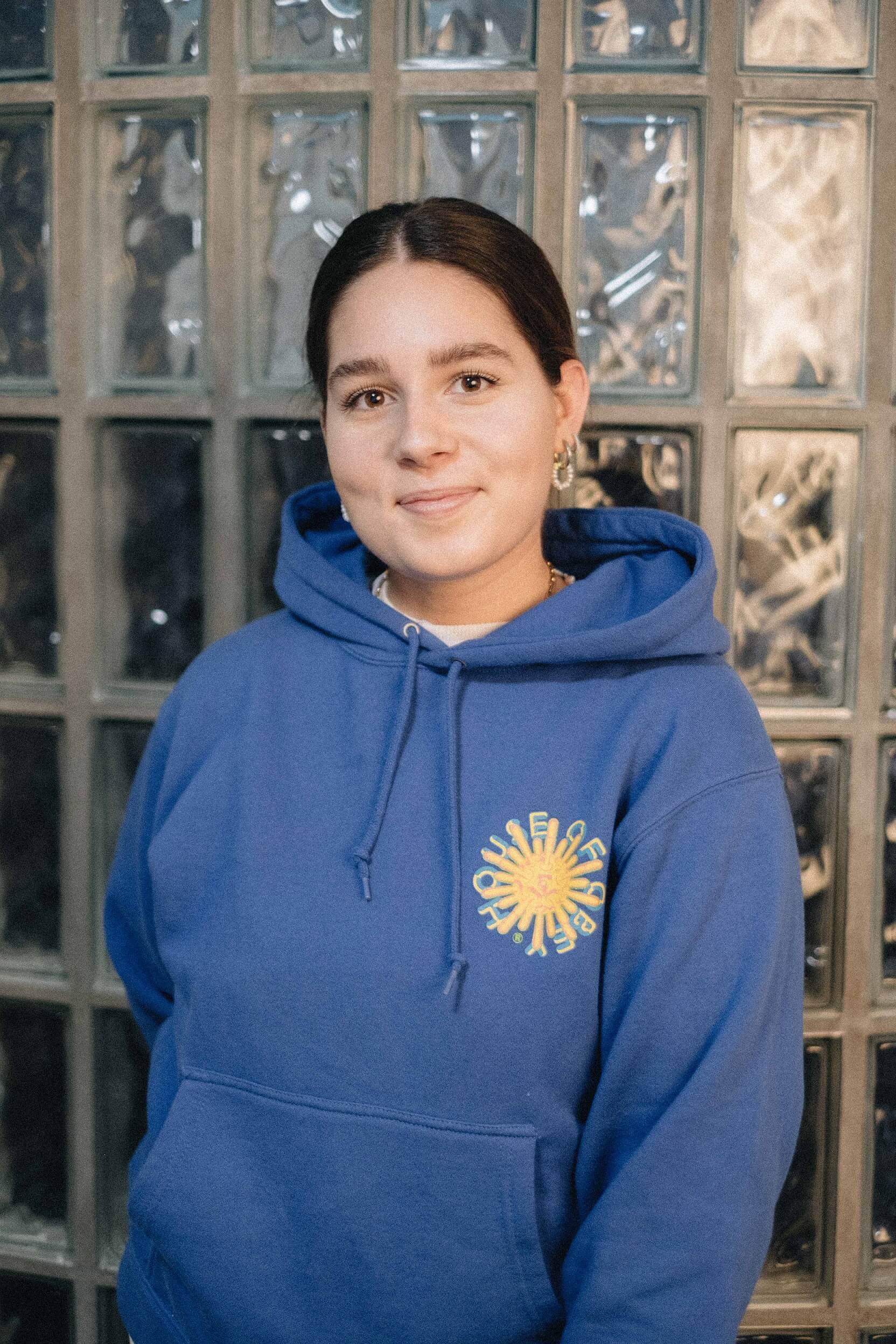 Brand Communication Designer.
Hannah Göbbels.
"I make datazeit look beautiful on the outside" - said, done. Want an example? Exactly what you see right now is made by our working student Hannah. Our youngest team member is our photographer (shot this picture here), does our visual communication and design (designed this website), and is very interested in the latest beauty trends (those fluffy eyebrows have come a long way). Although she has never actively related to or been particularly interested in data, both personally and in her Integrated Design studies, she has now also been convinced that it is simply wonderful. The trigger for this, rumor has it, was accessing the Tableau data analytics tool on her first day back in April this year, which has led her to now prefer to find data-based insights on pretty much any topic that interests her. 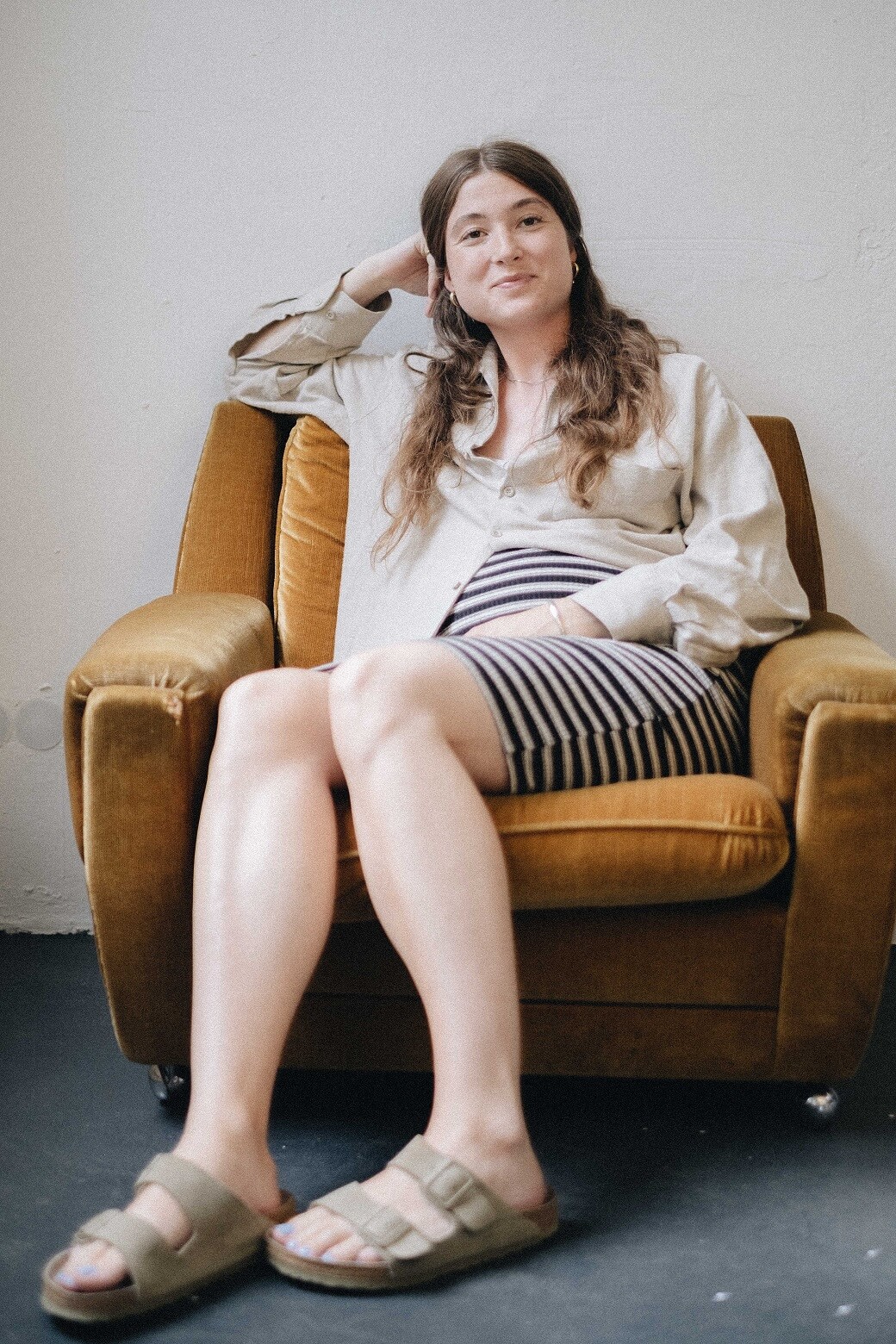 Citys best baker.
Anna Geyer.
Some companies have their own canteen where there is a meat dish, a vegetarian dish and a vegan dish - we got Anna. More valuable than any protein-rich superfood, served in a perfectly shaped petrol-colored porcelain bowl. Because nothing - absolutely nothing - comes close to Anna's homemade cinnamon buns, which are highly regarded in Cologne cafes, incredibly juicy and based on a secret recipe. Sounds simple, but it's not. Likewise, the banana bread is on a different level than normally known - the black sesame and white chocolate are not only a colorful match, but also a tasty one. But Anna, as a mini-jobber, not only strengthens our stomachs, but also the controlling team, by doing all the upcoming hard work (Excel says hello). As Excel says hello, we say goodbye - meet us in the kitchen. 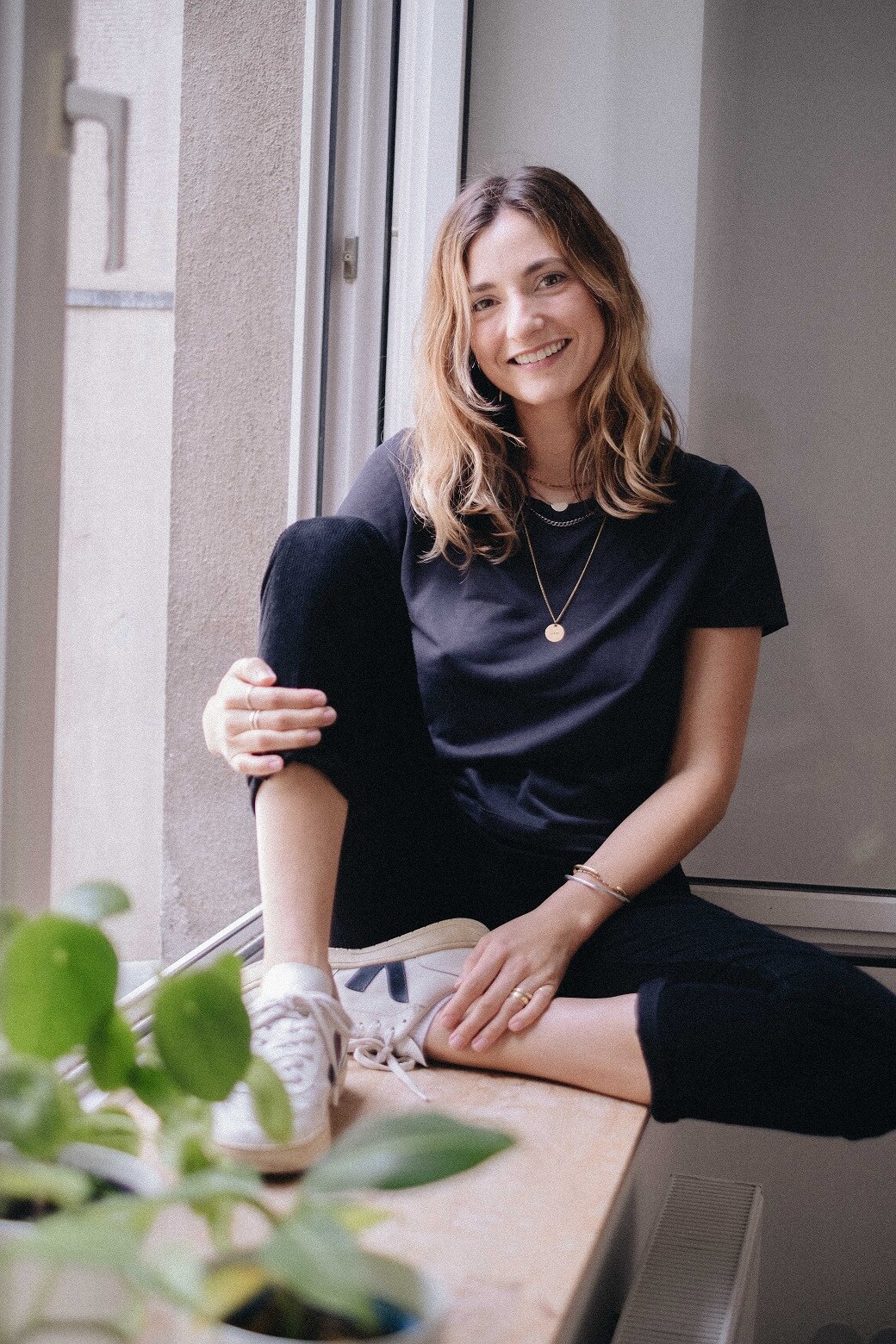 Administrator.
Amber Schimpf.
The woman with the perfect balance between pretty much everything. And this is how “everything” looks like: After working in television for many years, training as an naturopath, working as an elementary school inclusion teacher as well as in a fair fashion store, she is now completing her additional naturopath training while working with us. And the praised balance in life? This comes from her work as a yoga and health influencer - alongside. Now you’re probably wondering what's a lady with so many faces doing here. Not only has she been with us since day 1 as the company's background supporter, but by now we can't imagine life without her as the good soul of the office, plant mama, aesthetics representative and accounting support. Or as she puts it "Excel lists and all the other tasks no one else wants to do? Give it to me, baby!" (while holding a tea - or a cocoa). 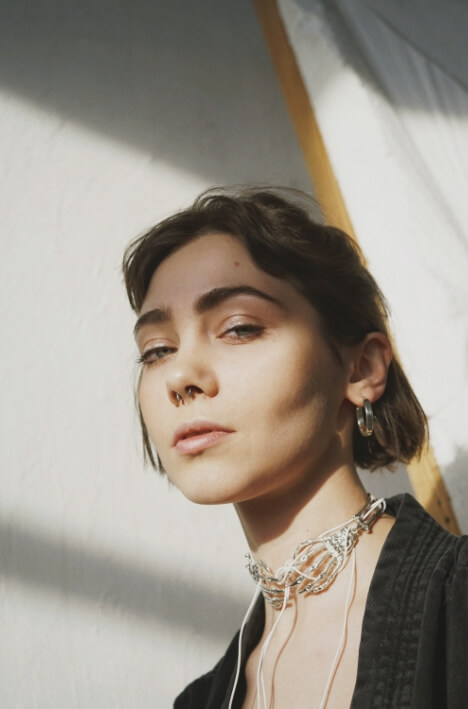